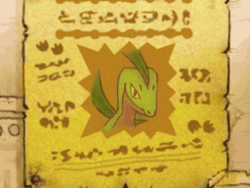 Pokémon seem to mostly write in footprint runes (Japanese: あしがたもじ) (referred to as foot-shaped writing in Pokémon Super Mystery Dungeon in English), which is a writing script based on various Pokémon footprints, apparently arranged in different directions. Footprint runes are first mentioned by the partner in the Explorers titles when the Groudon statue in Foggy Forest is found. Footprint runes can also be seen on Grovyle's outlaw notice.

"Reignite the life that burned within Groudon... Then the sky shall blaze with the sun's heat... The path to treasure shall be revealed."

Ancient foot-shaped writing has been left by Pokémon of the past in the Voidlands and around the Pokémon world. Unlike most other Pokémon, the partner character in Super Mystery Dungeon is able to fluently read them. Mawile studies this form of writing. 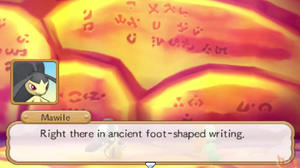 "Should you hope to overcome this crisis, summon a person. A person will have the power to break the barrier over the spring. You must summon a person from the world of humans."

"These are the Voidlands. The spirits of Pokémon that have been turned to stone are locked away here."

"Enemy Pokémon in the Voidlands are not real Pokémon. They are all apparitions made up of hate and given physical form. We must continue onward to defeat them."

"Why do Pokémon become stone? Dark Matter is the source of all woe. Dark Matter absorbs the energy of Pokémon as it turns them to stone. With that energy, it grows stronger. Dark Matter will continue to turn Pokémon to stone to enlarge itself."

"At last you've made it here. Just beyond here, at the top of Reverse Mountain, is the door to hope. A path of light that connects to the world you once knew. It is an exit from these Voidlands. However, there is a problem. A countless number of Void Shadows are blocking the light from above the ground. The power to defeat these Void Shadows...is unfortunately not something I posses. And so I will wait here. Judging by the position of the stars, Dark Matter should stop momentarily... Dark Matter is related to the movements of the astronomical bodies. If everyone fighting back against Dark Matter in the world...can somehow protect the Tree of Life...Dark Matter will cease, and the end of the world will be averted. And I will be able to leave this place... In other words, I'll be able to return from being stone. However, even if I were to get out of here, the fight would not end there. I must prepare. For the distant future..."

The text in this area isn't directly read by the characters.

Squiggly characters can be see on the Rescue Team artwork for Pokémon News, Pelipper's notice in Gates to Infinity, and the Pokémon News model in Rescue Team DX. This writing seems to be associated with Pelipper.

An ancient Unown language is seen in the Hidden Land in the Explorers titles and Explorers of Sky - Beyond Time & Darkness. Grovyle and his his human partner have studied this language together in the past. 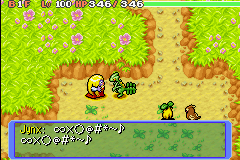 Jynx can speak their own language that other Pokémon can't understand, as seen when talking to Jynx inside a dungeon in Red & Blue Rescue Team, where it is represented with various characters. Unfortunately, when speaking to Jynx as another Jynx, the text remains the same. 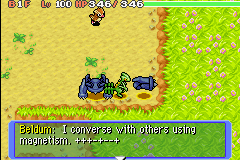 Beldum can communicate with others using magnetism. This is represented in Red and Blue Rescue Team with plus and minus symbols.

For the anime episodes OLM took the same approach they've been using for the main series Pokémon anime. In Explorers of Time & Darkness various unidentified characters are used. In Gates to Infinity they instead used the more standardized characters that they've been using since 2010. This latter form of writing is a substitution cipher for the Latin alphabet.

Texts that don't fit in other categories.