Mystery Dungeon: Pokémon World: Pikachu’s Great Adventure (Japanese: 不思議のダンジョン ポケモンワールドピカチュウの大冒険) is a tentative title for Pokémon Mystery Dungeon: Red and Blue Rescue Team and can be used to refer to prototype versions of the game.

The tentative name was first mentioned on August 7, 2004 in the third thread of a Chunsoft general on 2channel, where the economical troubles of the company were being discussed and leaks were being posted. The leaker claimed the game was being developed for the Nintendo DS. 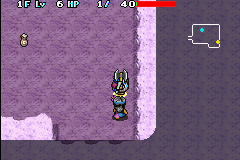 A screenshot of Torneko's Great Adventure 3 Advance, released in 2004 in Japan. 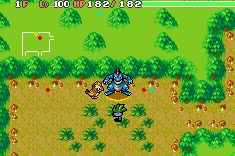 A screenshot of Red and Blue Rescue Team, released in 2005 in Japan.

While not much about this version of the game is known, a lot can be said about its title. Pikachu being mentioned suggests it might have been the only playable character in the game. The title being similar to that of the first Mystery Dungeon game, Torneko's Great Adventure: Mystery Dungeon, may suggest the game was originally planned to be closer to most other Mystery Dungeon games, meaning the main story would have revolved around a single dungeon specifically designed for Pikachu. "Pokémon World" being a separate title could also suggest the game was being considered as a part of a larger Pokémon series not featuring human characters, including games outside of the Mystery Dungeon franchise.