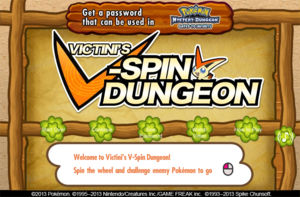 Victini's V-Spin Dungeon (Japanese: ビクティニのVルーレットダンジョン, Victini's V-Roulette Dungeon) is a Flash minigame that can or could be found on official Gates to Infinity websites. Completing the game rewards the player with five Wonder Mail passwords.

The game begins after the player chooses which Pokémon to play as. A wheel consisting of 6 slots appears in the middle of the screen. On the left side of the screen are ten rectangles showing different environments, each one representing a floor of the dungeon. The goal of the game is to reach the tenth floor, at the bottom of the screen. The player can progress to a lower floor by winning a turn while losing or drawing brings back to upper floors. At the start of a turn, the player is shown an opponent Pokémon alongside a value, 1, 2, or 3, which indicates the number of floors jumped at the end of the turn.

The wheel has nine slots, and each of them can be yellow, green, black, blue, orange, or pink. At the start of a turn, the wheel will always have three yellow slots, three green slots, and three black slots. The order of the slots and the starting position of the wheel depends on the chosen Pokémon. After starting to spin the wheel, the game asks the player to wait a few seconds before allowing to stop it. The result of the turn depends on which slot the wheel stops on. Yellow slots mean the turn results in victory, green slots mean the turn results in a draw, and black slots mean losing. Winning increases the current floor by the amount specified on-screen while drawing or losing decreases it. Additionally, losing a turn results in the player's Pokémon losing HP by that same amount. Reaching 0 HP results in a game over unless the player obtained a Reviver Seed.

Every time the wheel stops, there is a random chance that it will jump to the next slot instead of stopping where it normally would. Starting from the seventh floor, the wheel spins faster.

Stopping the wheel as soon as the game allows guarantees that it stops on the same slot where it started unless the wheel randomly skips to the next slot. This trick makes Pikachu, Tepig, and Axew the easiest Pokémon to win the game with.

Snivy and Tepig have additional special characteristics. When playing as Snivy, the number of floors jumped when winning a turn is doubled and when playing as Tepig the wheel always spins at regular speed.

At the end of each turn, there is a chance to obtain a random card. Pokémon other than Pikachu already have a card at the start of the game. Cards currently on hand can be seen on the right side of the screen, where they can be selected by the player at the start of a turn before spinning the wheel. Using a card changes a slot in the wheel to a different color and effect. Special Cards (Recover HP, Increase MAX HP, and Reviver Seed) change the slot to an effect that isn't otherwise available on the wheel, while the only regular card, Extra win, adds an extra yellow victory slot. Once a turn ends, the wheel is reset. If the wheel stops on a Special Card slot, the current floor stays the same, and the opponent changes.

The game uses music from the Gates to Infinity soundtrack. "What's Wrong with Everyone?" plays at the title screen menu and all menus other than the player Pokémon selection screen, where "Main Menu" is used instead. "Stony Cave" is used for the game, but "Beartic Slide" plays while spinning the wheel.

The English translation of the minigame contains many mistakes and inconsistencies.