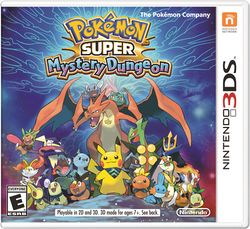 Although the fundamentals of the game are similar to previous Pokémon Mystery Dungeon games, there are many changes to how the game is played, as well as many newly introduced items and features. The more noticeable changes are the lack of random recruitable Pokémon in dungeons and the endless missions from previous games, both features being instead replaced by the Connection Orb, which allows the player to access a web of requests tied to Characters with fixed dialogue. Characters befriend the player and become playable Pokémon when missions are completed. Some Characters can also be met and befriended while in a dungeon, which also affects the Connection Orb. When Pokémon other than the player character and partner character are used outside of Pelipper Island they will frequently go on breaks, preventing use for a few in-game days. Completing a Connection Orb request doesn't immediately give a reward. To receive rewards, the player needs to visit a Café Connection and get them from Kangaskhan.

The game balance is different from other games, as enemy Pokémon take more hits to defeat, and the game forces the player to progress the story immediately instead of allowing to grind for an infinite amount of in-game days without progressing the story. Because failing an Adventure results in losing all items, the game instead suggests returning to the Main Menu without saving before trying again. Quick Saving is removed, replaced by saving while inside a dungeon, which can only be done by using a Progress Point floor tile created from a Progress Device or Progress Device +.

Due to enemies taking more hits to defeat, avoiding them or afflicting Status Conditions is encouraged, which is made easier thanks to the introduction of Wands, new items that are similar to Staves from Mystery Dungeon: Shiren the Wanderer. Temporarily increasing stats is also common. Speed (not to be confused with Travel Speed) is a new stat introduced in the game. Walking towards a Pokémon while in a dungeon now pushes them in that direction instead of swapping places with them, which is instead done by walking towards them while holding B. Dungeons use both randomized floors and shuffle floors.

The equipable items in the game are Looplets, which allow the insertion of Emeras, new items that give Looplets extra effects. However, all Emeras disappear when the Adventure ends. Emeras can also be used on a Pokémon to temporarily boost stats for the Adventure only. Emeras can only be found in dungeons. When entering a room that contains Emeras, a number appears on top of them indicating how many turns are left before the Emeras shatters. Collecting the dust left behind by broken Emeras (which can also be found in corridors or made by intentionally shattering Emeras by throwing them) can make a full Emera. Emera mechanics are similar to some gameplay mechanics from Etrian Mystery Dungeon. The newly introduced Awakening, a gameplay mechanic and Status Condition obtained by inserting the Awakening Emera in a Looplet, makes the affected Pokémon stronger and, if available, makes them Mega Evolve. When an Apple is found, it has a special icon indicating that it is fresh, meaning its value in shops is higher.

The player character and partner are both determined by a questionnaire at the start of the game, however, the player is also given the choice to choose the Pokémon from the full list.

Outside of dungeons, the game features more town locations compared to previous games. In addition to the two towns accessible in the game's main setting, the Water Continent, the player can also buy passes to gain access to other Continents. Some Connection Orb missions don't require the player to do anything inside a dungeon, instead simply involve talking with specific Characters. Items can also be found scattered around towns.

In April 2015, editors of Famitsu DS+Wii magazine stated that a new Pokémon game would be revealed the following month and that more details would come in a future issue. Pokémon Super Mystery Dungeon was later officially announced by The Pokémon Company and Nintendo via a press release on May 21, confirming the game's release for late 2015 in Japan and North America and early 2016 in Europe. Like previous entries in the Pokémon Mystery Dungeon subseries, it was developed by Spike Chunsoft. Gameplay footage from the title was first showcased on a Nintendo Direct broadcast on May 31, 2015, along with the Japanese release date.

The player character wakes up transformed into a Pokémon and only remembering that he used to be a human. When he is suddenly attacked by a group of Beheeyem, a friendly Nuzleaf helps him escape, gives him shelter in Serene Village, and enrolls him in a school for young Pokémon. There, he meets the partner character, who dreams of joining the Expedition Society. During their adventures at the village and its nearby locations, they meet an Ampharos who helps them in their adventures. Eventually the two protagonists choose to run away from the village to reach Lively Town, where they become full members of the Expedition Society. Rumors of Pokémon being turned to stone spread around the world, and the group begins investigating the mystery. Nuzleaf joins them on the chase of a suspect, ending at the top of Revelation Mountain, however, once they get there, he reveals his true intentions by petrifying the group with the help of Yveltal. Petrified Pokémon around the Pokémon world find themselves in another world known as the Voidlands. As they try to find a way to escape, they discover that the planet's life source, the Tree of Life, was once pulled toward the sun by an entity known as Dark Matter. They eventually meet Raikou, Entei and Suicune, who help them escape by reaching the top of Reverse Mountain. The player and partner characters return to the Expedition Society headquarters but are confronted by an escaped Beheeyem, who informs them that Dark Matter feeds on the negativity of others and can possess Pokémon. He also mentions that he believes the Tree of Life to be in the deepest part of the Prehistoric Ruins. He leads them to the ruins, but when they reach the depths, they realize that Nuzleaf, anticipating Beheeyem's betrayal, lied about the location of the Tree of Life. Meanwhile other members of the Expedition Society have met with a Celebi, who helps them escape and transports everyone to the Road to Primeval Forest, where the Tree of Life actually is. Celebi suggests that the player character may have helped stop Dark Matter in the past alongside Mew. The player and partner character reach Dark Matter and destroy it, saving the Tree of Life and thus its physical form, Xerneas. Everyone celebrates, but the following morning the partner character is revealed to have been Mew all along. The player and partner characters agreed to have the memories of each others erased, and the latter begins to disappear in a ball of light. After the credits, the player character is determined to bring the partner character back. Ampharos suggests asking Xatu for advice, who tells him Mew lives in the Mystery Forest. While this Mew behaves similarly to the partner, they seem to be two different entities. In the end, Mew is kidnapped by Nuzleaf and the Beheeyem, supposedly having learned of Dark Matter's presence in Mew, with the intent to destroy Mew before Dark Matter could revive. This turns out to be a ruse to make the partner character, who was inside Mew, come out and let both exist independently. Mew then returns home, and the player and partner characters resume their work.

It was the highest selling video game in Japan during its debut week, with 151,823 copies sold, and would go on to sell a total of approximately 295,598 copies in the region by the end of 2015. As of March 2016, it has sold approximately of 1.22 million copies worldwide.

On February 16, 2022, Nintendo announced they will remove the ability to purchase games from the Nintendo 3DS and Wii U eShop in March 2023. As such, many Mystery Dungeon titles released on 3DS including this one will no longer be available after this time.[1]