The MDFW - Documenting Mystery Dungeon since 2008.
Jump to navigation Jump to search
This Beach Cave page is about Explorers of Sky. For Explorers of Time and Darkness, see Explorers TD:Beach Cave.
For the lore page on Beach Cave, see Pkmn:Beach Cave.

The first time the player and partner arrive at Beach Cave Pit, they fight Koffing and Zubat, who have stolen the Relic Fragment from the partner. During the first exploration, it is only possible to carry one item at a time, as the Exploration team has yet to obtain the Treasure Bag.

Beach Cave is the only dungeon that can be reached in two different ways. The first is to take the usual way, the east entrance from Treasure Town's crossroads; the second is to go through the entrance on the beach itself.

This is one of the smallest dungeons in the Explorers games: it only has four bottom floors before reaching the final goal, floor 5, titled as Beach Cave Pit, and each floor only has four to six rooms. Water appears throughout the entire dungeon.

The player can not send a rescue help in Beach Cave.

Pokémon encountered in the dungeon are unrecruitable and has only Water and Rock type types Pokémon, which is a huge disadvantage for players who picked a Fire type Pokémon. 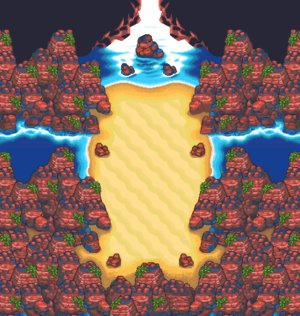 Once the player goes through Beach Cave Pit, a cutscene plays before fighting against Team Skull. The area itself is in a rectangle with a length of 7x11 tiles and diamond-shaped obstacles around it. The boss fight are composed of Poison and Flying type Pokémon, which is a huge disadvantage for players who picked a Grass type Pokémon.

Zubat and Koffing can only be found here on the first visit, otherwise, the dungeon is considered complete.

Unlike other dungeons, this one will automatically have the following items no matter which bottom floor the player is at.

There are no traps generated in Beach Cave.