Shiren 5 Mobile:Shiren the Wanderer: The Tower of Fortune and the Dice of Fate 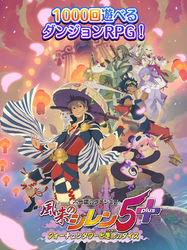 While it is a port of the 2020 version, there are some additions to this new version of the game. The game can now be played horizontally or vertically, with an interface similar to the smartphone release of Mystery Dungeon: Shiren the Wanderer. iDash

, originally featured in Shiren the Wanderer 2, is added. A button in the title screen allows saving and restoring save data to and from the cloud, with cross compatibility between Android and iOS.

Despite this version of the game currently only being released in Japan, when a new save file is created the player can choose between the four available languages (Japanese, English, Traditional Chinese and Simplified Chinese) just like in the 2020 version.

Multiplayer features are compatible with the 2020 release.

The Tower of Fortune and the Dice of Fate is a roguelike role-playing video game in which the player traverses randomized dungeons and fights monsters. In dungeons, the player can find treasures, as well as items and equipment that they can collect and use. If the player dies, they lose their items, their level resets to one, the dungeons change, and the monsters change positions. The game has a day-and-night system; as the in-game sun sets, the player character's vision decreases, making it impossible to see enemies that are too far away. At some points in dungeons, the player needs to solve puzzles.

The story is set between the events of Shiren the Wanderer GB2 and Shiren the Wanderer 3, and follows Shiren, a wanderer and silent protagonist, who is accompanied by Koppa, a talking ferret. The two are climbing the Tower of Fortune, as they have heard legends of a god that can change their fate. The story begins as Oyu, a young girl from a small town, suffers from an illness and Jirokichi, her childhood friend, goes forth towards the tower to change her fate. They are guided through the tower by Tao, a girl in a panda suit, and encounter other characters thorough the story: Okon and Koharu; Gen; and Kojirouta. Shiren and Jirokichi eventually climb the tower to fight against the ruler of fate himself, Reeva.

The smartphone version was released by Spike Chunsoft in Japan on March 29, 2022.

For this subject's image gallery, see Shiren the Wanderer: The Tower of Fortune and the Dice of Fate.