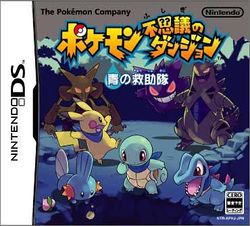 Rescue Team is the first game in the Mystery Dungeon series to be released outside of both Japan and North America. The community commonly calls both versions of the game Rescue Team, or RT for short.

The player starts out as a human who turned into a Pokémon, which can be one of sixteen Pokémon (Bulbasaur, Charmander, Squirtle, Pikachu, Meowth, Psyduck, Machop, Cubone, Eevee, Chikorita, Cyndaquil, Totodile, Treecko, Torchic, Mudkip and Skitty) and is determined by a personality quiz taken at the beginning of the game. The player chooses a partner Pokémon which is one of ten Pokémon (which excludes the last six stated above and the Pokémon of the same type). The game is mission-based with many jobs, which can be found on the bulletin board, requested by mail, or initiated through story events, and include rescuing Pokémon, delivering items, and escorting clients. If the player successfully completes a job, they receive a reward, and Rescue Points, which increase a team's rank.

These jobs take part in dungeons, of which the layout is randomized. The objective is to either finish a job, or go through all the floors to find the exit. In the dungeon, there are wild Pokémon that battle with the player's team. These battles are turn-based, and take place in the dungeon map. Pokémon fight using the four moves they know, by using a standard 'A button' attack, or using projectiles and other items. While going through the dungeon, the player gets hungry and has to eat food, either found in the dungeon or bought in advance.

The player wakes up one day finding that they have been transformed into a Pokémon, without any memory of their past. In a world devastated by many natural disasters — that have only begun to happen quite recently — the player and a newly made friend join forces and form a rescue team. The team meets other rescue teams, including a top-ranked rescue team consisting of Alakazam, Charizard, and Tyranitar, named Team ACT. The team makes enemies unwittingly with another rescue team, Team Meanies, consisting of Gengar, Ekans, and Medicham, who seek world domination under the disguise of a rescue team. Not far into the storyline, the player is told of a legend about a Ninetales laying a curse on a human who had deliberately grabbed Ninetales' tail. Ninetales predicted that the human would eventually be reborn as a Pokémon, and that the natural balance of the world would be upset. In the quest to discover the player's lost memory and purpose as a Pokémon, the team journeys to where the fortune-teller Xatu resides. Xatu is quick to realize that the player was once a human and tells that the player's human-to-Pokémon transformation is tied together with the natural disasters. This conversation is eavesdropped upon by Team Meanies' Gengar, who reveals the player's secret to the townsfolk and says that eliminating the human-turned-Pokémon in the legend would return the world to normal.

They are confronted by Alakazam, who says the Pokémon held a town meeting on what they must do to save the world: they must find and kill the player and anyone who sides with them. As they give the team one night to get away, the two leave Pokémon Square as fugitives and make their way to the northeasternmost part of the world in an effort to elude the teams that are now hunting them down. Along the way, they encounter the legendary birds Moltres and Articuno, who feel the effects of the disasters in their respective areas. They befriend an Absol who seeks to find the true cause of the natural disasters. The trio reaches the top of Mt. Freeze only to be cornered by Team ACT. They get ready to finish the player and partner off, but are stopped by Ninetales, who reveals that the player is not the human in the legend, that both parts of the legend are coincidental occurrences, and that the world is in greater danger caused by the awakening of Groudon. Team ACT proceeds to try and stop Groudon, while the team heads home to clear all remaining suspicion at Pokémon Square. After a few days, the player and the partner worry, as Team ACT has not come back from their mission to quell Groudon. Asking to rescue the missing Team ACT, Lombre refuses to let them go, saying there are plenty of tougher Pokémon than them. Shiftry convinces three of the strongest Pokémon, Blastoise, Octillery, and Golem, to form a special rescue team and rescue Team ACT. After a few days, the special team returns defeated.

After being discouraged by Gengar, the player and partner are able to get everyone's spirits back up, and volunteer to rescue Team ACT themselves. When the team reaches Magma Cavern, they find Charizard and Tyranitar defeated, with Alakazam fighting against Groudon alone before quickly being defeated. The team takes matters into their own hands and defeat Groudon. They return to town as heroes, but their celebration is short-lived as grave news arrives from Xatu. A huge meteor, revealed to be the true cause of the natural disasters, is heading for the world, threatening to destroy it. The only way to stop it is to ask for help from the sky guardian Rayquaza. It is less than cooperative, but after a battle, Rayquaza agrees to use its Hyper Beam to destroy the meteor. The team reawakens on the ground, surrounded by their supporters, where they find that the world is safe once again. However, the player must return to being a human and leave the Pokémon world behind. After the credits roll, the player returns to the rescue team base in Pokémon form and surprises everybody.

As time passes, many more secrets are revealed. A shard of the destroyed meteor opens a secret cave under Whiscash Pond, enabling evolution. It is later revealed that another shard hit Latias' wing, and the team rescues her at Pitfall Valley. It is eventually discovered that Gengar was the human from the legend; after uncomfortably getting the player's assistance, he manages to remove the part of the curse that affected his old partner Gardevoir.

The cover art of the game was drawn by Ken Sugimori. It directly connects with the cover art of Red Rescue Team when placed above it, representing the Dual-Slot features of the game. A Mudkip, a Squirtle and a Totodile are in a blue forest are looking down at a hole. A Pikachu is scared as he sees Alakazam, Gengar and Tyranitar are chasing them, with red eyes. Pikachu, Squirtle and Totodile wear generic blue scarves. A Pecha Berry is on the ground next to Mudkip.

The European version has several small differences. It is edited to move the Pecha Berry next to Pikachu instead, so that it isn't covered by the PEGI rating. In addition, Pikachu is also moved slightly to the right, allowing Alakazam's spoon to be seen. Tyranitar is also slightly moved to the right, allowing all of Gengar to be seen. However, Totodile partially covers Tyranitar's paw.

The Nintendo VIP 24:7 voucher included with the European version shows an expanded version of the artwork, extending the area to the right, showing that the tree and rock seen in the cover art are much bigger.

This illustration received an animated adaptation in the tenth version of the fourth opening of the Pocket Monsters Advanced Generation anime series. See the gallery on the Pokémon Mystery Dungeon: Red and Blue Rescue Team page for more information. The artwork was later reworked for the remake.

After the existance of the game was leaked online in August 2004 under the title Mystery Dungeon: Pokémon World: Pikachu's Great Adventure, it was first revealed in August 2005 and the Japanese release date was announced in September. More details were released later that month, showing information about the gameplay and plot. In November, Nintendo announced a bug in the Blue Rescue Team version involving its connectivity with its GBA counterpart, Red Rescue Team, which would completely erase the contents of any other Game Boy Advance game besides Red Rescue Team that was loaded into the system. Nintendo quickly patched the bug upon discovering it and issued a new shipment of replacement DS cards with the patch on December 8. At E3 2006, Nintendo announced the English release of the games and revealed the release date later that month.