The MDFW - Documenting Mystery Dungeon since 2008.
(Redirected from Gates:Gates to Infinity)
Jump to navigation Jump to search 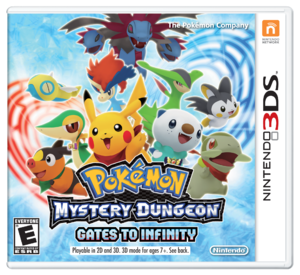 The game plays mostly similar to previous entries in the series, with some changes to how Travel Speed is handled and hunger being disabled in most dungeons. Gridless Floors are a new type of floor, where Pokémon can walk around freely without a grid and without turns until an enemy is approached. Changing floors are all shuffle floors, which make their first Pokémon Mystery Dungeon appearance in this game, but had already been featured in other Mystery Dungeon series. Move upgrades are introduced. Some boss fights have Pokémon facing a different angle instead of the usual forward-facing enemies seen in previous games. Kecleon Shops always take up an entire room, unlike previous Pokémon Mysery Dungeon games, where they would only use some of the tiles in a room. The skill system featured in the game is known as Team Skills, a simplified version of the IQ skills from the previous games. Traps disappear after being triggered. Gifts are a new category of item that allow the player to recruit enemy Pokémon by using giving it to them, but regular recruitment methods can still be used. Body Size party limits are removed, but some Pokémon are physically bigger than others. However, those Pokémon only appear as bosses, whereas they can actually be used by the player in later games.

The controls are improved. While Moves can still be selected from the regular menu, which can also be accessed by pressing X whenever the menu is open like in previous games, moves can be more easily chosen by holding L and then pressing A, B, X or Y, with each button being assigned to one of the four Moves a Pokémon can learn.

The amount of Pokémon featured in the game is greatly inferior to that of previous games, with most of the selection focusing on Pokémon introduced in Game Freak's Pokémon Black and White video game. Like in Adventure Squad, the personality test seen in the first two installments is absent, and players are instead able to freely choose the hero's species from a list of five Pokémon: Pikachu, Oshawott, Tepig, Snivy, and Axew. During the story the characters build a place called Pokémon Paradise, which the player can customize by arranging Lands and building Facilities.

The game features polygonal 3D computer graphics and makes use of the 3D capabilities of the Nintendo 3DS. Instead of the old 2D sprites, the game utilizes 3D models. In addition to the regular story mode seen in previous games a side mode accessed from the Main Menu uses the camera and sensors of the Nintendo 3DS for the players to find round objects and turn them into portals called Magnagates that lead to dungeons and are the namesake of the game. Downloadable content can be purchased from the Nintendo eShop.

The story of the game is similar to the first two Pokémon Mystery Dungeon games. It starts with the player character seeing Munna flee from Hydreigon, and then noticing that he is becoming a Pokémon. A blue Magnagate opens below him making him fall from the sky and ending up in a forest, where he meets the partner, who intends to create Pokémon Paradise near a settlement called Post Town. In the process of doing so, they befriend several Pokémon, including Umbreon and Espeon, dungeon researchers who aim to reach Glacier Palace, where Kyurem lives. Eventually the player character and partner decide to go on a mission to save Munna from Hydreigon, but discover this was actually a trap set by Munna and her gang. Initially believed to be a villain, Hydreigon reveals himself to be the physical embodiment of the Voice of Life, who brought the player character and other humans into the Pokémon world to save it. Kyurem, who is waiting for the world to end, confronts the player character, the partner and Hydreigon. He freezes and destroys Hydreigon's physical form, and severely wounds the player to stop them from destroying the Bittercold, a presence created by the growing negative emotions of Pokémon which would eventually destroy the Pokémon world. Kyurem warns the player character that if he doesn't give up, he will send him back to the Human world as he did with other human-turned Pokémon.

Sometime later, the heroes returns to Glacier Palace to defeat Kyurem and the Bittercold with the support from the Pokémon in Post Town and Paradise. Along the way they find Virizion's old friend Keldeo, who is also a dungeon researcher, who had previously reached Glacier Palace on his own and ended up trapped there. Hydreigon appears again, and the group celebrates its victory. However, the player is forced to return to the human world, with all of the memories the other Pokémon had of him supposedly getting erased.

On February 16, 2022, Nintendo announced they will remove the ability to purchase games from the Nintendo 3DS and Wii U eShop in March 2023. As such, many Mystery Dungeon titles released on 3DS including this one will no longer be available after this time.[1]