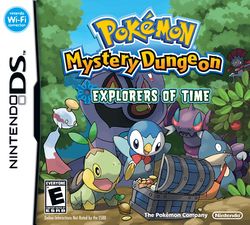 Explorers of Time, along with Explorers of Darkness, are the successors to Pokémon Mystery Dungeon: Red and Blue Rescue Team. They introduced Pokémon from the Generation Ⅳ mainline games, granting the amount of Pokémon available previously from 386 to 491. Shaymin and Arceus were excluded from the list as they were yet to be officially introduced in the mainline game Pokémon Platinum. Along with it, more features that take advantage of the Nintendo DS's dual-screen capabilities were put to the game featuring gimmicks used for Mystery Dungeon: Shiren the Wanderer and Pokémon Mystery Dungeon: Blue Rescue Team. The community refer to this game by the short name Explorers.

On the morning after a stormy night, you're awakened on a strange beach by a talking Pokémon! And you discover that you've been turned into a Pokémon yourself! After becoming friends with the other Pokémon, you, as the hero, partner up and join a guild made of many exploration teams. With your trusted friend, you go on a grand adventure in a world full of Pokémon chock full of mysteries and fascinating challenges. Playing as this team, you'll search for treasures, solve mysteries, recruit new members, and rank up your team! Along the way you'll investigate why you turned into a Pokémon and uncover the truth surrounding the mysteries of time and darkness in this Pokémon world. Get ready to explore the far reaches of this world with your Pokémon friends and unravel its many secrets.[1]

While the games had a successful selling score, the rating for both games were generally underwhelmed by the media.

Following its selling, multiple anime adaptations, manga, goodies and strategy guides books were produced during the post-release of the games.