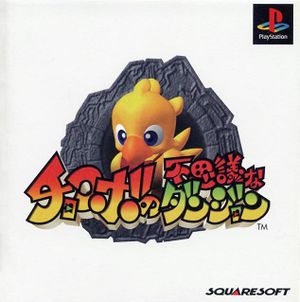 Chocobo's Mysterious DungeonFT (Japanese: チョコボの不思議なダンジョン) is the first Chocobo's Mystery Dungeon game. There are two official releases for Chocobo 1; the first released for the PlayStation in 1997, and the second released on WonderSwan in 1999, all of them exclusively in Japan.

The game's initial release for the PlayStation in 1997:

A port of this game was released on WonderSwan in 1999: